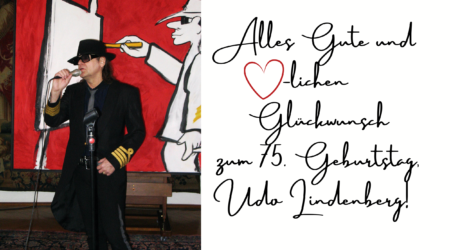 Welcome to Udopia, the land of the fabulous singer and song writer:

Udo has created Udopia as a world full of love, respect and rock’n’roll. His music has accompanied me all my life. As a kid, his songs were the very first ones, I discovered and identified as “my music”. Mainly because he sang in German, I guess. But also his lyrics were very catchy and far away enough from the music my parents liked.

I’ll never forget that one memorable evening:
I was 12 years old and felt unbelievably mature.
And so did my friends Katrin, Matthias and Dominik.
The four of us met secretly behind the football field of our schoolyard, next to the so called “love bench”. This bench got its name because of all the carved hearts and initials in the wood. (… and psssst! If that bench would still be there, you might find a T+M and K+D on its back rest.)

Anyway, we all wore denim jackets and black hats.
That evening we founded our “Udo-Panic-Club” by pinning each other a self-crafted badge on our jackets. To emphasize on the importance and conspiracy of our thing, we solemnly shared one cigarette which Dominik stole from his grandfather.
From today’s perspective it might seem just childish. But the confidential aspect of it, actually touched a political dimension, we could only sense as the event took place in East Germany during the cold war. Udo Lindenberg was one of the rare West-German artists, who used his influence and popularity to remind people of the injustices taking place in the GDR. He even dared to provoke Erich Honecker, the GDR chief himself, in one of his songs “Sonderzug nach Pankow”. This song alone caused quite an agitation and lead to a row of political issues.

Years later, I had the luck of seeing Udo Lindenberg live on stage. It was just awesome and I had goose bumps for almost three hours.
And of course, I remembered myself as the twelve year old kid with the Udo-Panic-Club-Badge, who would never have imagined that this would ever happen.

Today, Udo turned 75.
And I think you, dear Germanee, should definitely get to know him.
He is unique in every way.
As a singer and as a person too.

Whether you’re in love or love sick with a great and deep heart ache, whether you’re down or flying very high, whether you’re feeling lost and forgot where you belong to or you’re in best shape and feeling so alive. There will be always a song among Udo’s 800 songs repertoire to capture and intensify exactly what you’re going through. Although he sings in German, he has created his very own Lindenberg-language full of word inventions as precise and so to the point as only he could come up with.

To give you an example, I’m going to translate just the first lines of his famous song “Hinter’m Horizont”, beyond the horizon. Udo Lindenberg wrote that song, after he lost a very close and dear friend, who died way too early.

Dear Germanee, you have to check out this link
and listen to Udo’s song “Hinter’m Horizont”!
I’d love to know, what you think. So please, leave a comment below.

Udo Lindenberg is a hedonist and political activist at the same time.
How is that possible, you might wonder.
It’s just him.
To people who hear, see or meet him for the first time, he might appear as the crazy guy, one can’t take seriously.
He’s always puffing a cigar, wearing a hat pulled deeply into his face, dark sun glasses, his typical uniform-like jackets, slim trousers, a studded belt and neon-green socks. Udo is an icon, a living legend. For 26 years he has resided in a suite of Hotel Atlantic in Hamburg.

From the bottom of my heart, I wish him many, many more years to come in good health and so alive.