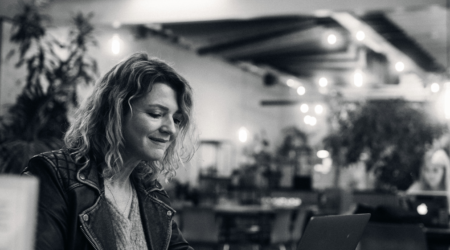 In this series, I’d like to give you a powerful introduction into German language by explaining 26 + 2 verbs, following the main-letters of the German alphabet.

The next letter in our German alphabet, following the “C” is … bingo! … the “D“.
We pronounce it similarly to English.
In case, you’ve missed the C-post, explaining the verb campen, you can find it here: 26-2-german-verbs-in-action-part-4.

As a popular German example-verb starting with an D, I’d like to introduce you to:

We often use the phrase Ich denke … to express our thoughts, beliefs or opinion.
And also as a question Was denkst du?, to ask another person for his approval, opinion or just to politely include someone in an ongoing conversation.

Now, let’s have a look, how denken – as a regular verb – changes in action:

Right now, I’m wondering, whether you, dear Germanee, might find these verb-conjugation-tables a bit boring. But otherwise, ich denke, it can be useful for you to get more familiar with and reminded of these ending changes.

I’d like to show you, how denken is used even in a situation, where we’d usually more feel than think.

Shireen and Lukas, newly in love, are having a romantic dinner in an Italian restaurant.

Ok. Ok, dear Germanee, ich denke, du denkst gerade: OmG, how cheesy! But, believe me, it’s indeed a challenge to stick to these few verbs you’ve learnt from previous posts and create a meaningful dialogue. Ich denke, that genius German, I’m going to tell you about now, would have been more talented to master it;).

I have to admit, although I did my masters in German literature, it took me many more years after university to fell in love with our famous Goethe. In fact, I had to travel to the city of Weimar, where Goethe lived most of his time. There I finally understood his true brilliance.
Johann Wolfgang von Goethe was a universal genius and a hedonist, who knew how to live life to the fullest. His poems, plays and novels prove only one of his many talents.
The scope of his collected works is up to 143 volumes, which include aside of his literature work, countless essays about scientific subjects, ranging from the theory of colors, his discovery of a small bone at the tip of the upper jaw, being a landscape architect to the morphology of plants.
Shortly after publishing “Die Leiden des jungen Werther”, “The Sorrows of Young Werther”, he became a rock-star of his era. I could probably continue my praises of this outstanding Denker for hours as there would be so many remarkable events and achievement. Right now, it comes to my mind that I should soon write an additional blog post about the brilliant Goethe in the category Kunst & Kultur, art & culture.

But … stop! Didn’t you too stumble about the fact, that all Dichter und Denker, I named above, were men?! No smart German ladies? I can’t leave it like this. Have you ever heard about Hildegard von Bingen, Dorothea Erxleben, Clara Schumann, Hannah Arendt? And of course, there would be many more to name and not least Angela Merkel.

P.s.: If you are too curious now to learn a bit more about Goethe and Weimar, please check out this link to a short video by Deutsche Welle: DW Weimar – Goethe, Schiller & Co. https://www.dw.com/en/weimar-goethe-schiller-co/av-18346649