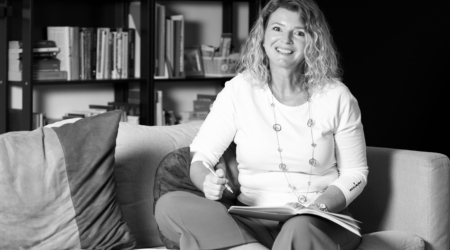 The third letter of the German alphabet won’t come as a big surprise to you: It’s the C.
Well, we don’t have many words in German starting with a C.
We borrowed most of them from other languages.
If a German word starts with C, we’d pronounce it like a K, i. g. Clown or Camping.

While camping leads me directly to the verb, I’d like you to get in touch with.

Does it look familiar to you?
Yes, you’re right.
We stole it from the English language and just added our German verb-endings.

Then, let’s have a look how the verb campen changes in action.
Do you recognize these different endings already from part 3-verb backen?

I believe, there are three different groups of camping people in Germany:

Either youngsters go for camping or families
or die-hard campers of the elder community.
I have to admit straight away, I don’t belong to any of them;).

Let’s have a closer look,
how we’d use the verb campen in our everyday German.

Imagine, it’s Friday,
weekend just around the corner
and a wonderful summer morning.

Nadja and Carlos bump into their common friend Marie
in front of their university.

How was it?
I’m sure you understood that these friends talk about their weekend plans. They wanna go to the Fusion festival, a very popular one among fans of electronic music.

There are numerous other festivals for all kind of music in Germany,
from spring time till late summer.
Just to name a few:
Rock am Ring for rock and punk music over three days, with around 90,000 visitors.
Wacken open air for fans of Heavy Metall with about 75,000 guests
or Lollapalooza for rock, rap and punk as well as dance, comedy, fashion and art.
Aside from these kind of huge events, there are smaller and cozier ones too, almost every weekend around the year for every music taste.
If you’re interested in getting some detailed information about all festivals, you can check out this website: https://www.festival-alarm.com

For many Germans – of all ages or stages of life – it’s a must to travel around the country and spend some summer weekends at one of these festivals.
I believe, it’s the full package of fun, joy and music, what makes the experience so unique: Taking a break of normal routines. Enjoying music, live performed by world class stars on several stages. Spending intense hours with your friends, but also with new people you’ve never met before.
Stepping back to the roots of civilization by sleeping in a tent and preparing your morning coffee on a camping stove. Being exposed to nature and weather; unlike Dubai there is no guaranteed sunshine in Germany;).

And what about you?

Campst du gern? / Do you like camping?
Wo campst du? / Where do you go for camping?
Und warst du schon mal bei einem Musik Festival? / And have you ever been at a music festival?

I’d love to know your stories!

… and let me know your camping adventures in the comments below!