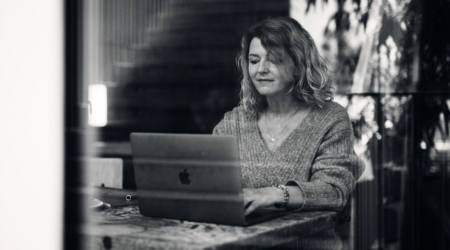 In this series, I’d like to give you a powerful introduction into German language by explaining 26 + 2 verbs following the main-letters of the German alphabet.

After learning about the most basic verbs sein and haben in part 1, let’s now begin with letter A. In German, we pronounce the A as you’d pronounce the last letter in the name Anna.

As a popular German example-verb starting with an A, I’d like to introduce you to:

Now, think about any detail you love the most about your work.
Do you smile now?
Great.
Since all good things come in threes, keep on smiling and
say it one more time: ar – bei – ten. Wonderful!

Now we need to combine our action arbeiten with heroes, performing that action:

As you can see, depending on the hero, in other words pro-noun, our verb changes its ending, while the root of the word arbeit(e) remains. These ending-changes apply to every German verb.
Ehmmm, aside from a few exceptions.
But, only a few. I promise.

Let’s now use arbeiten a bit in context.

Igor and Linda are participating at a seminar and having a chat during their coffee-break. Right now they’re talking about their professions, what and where they and their partners work.

In this short dialogue, you can see how we would use the verb arbeiten and how its endings change, depending on the person it’s related to. When Linda says Ich arbeite… or when Igor speaks about his wife Sophia / sie arbeitet…

You can also learn how arbeiten is used to give more information about your job, what, where and for whom do you work:
Ich arbeite als Ingenieur. Ich arbeite bei Siemens. and Ich arbeite in München.

Now it’s your turn: Please build up your own sentence and answer my question at full length.

I’d love to know about you! It would be great if you could write your respond in the comments below.

Vielen Dank! / Thank you very much.

Wishing you a germanful day,

P.s.: There are many slang words for arbeiten and one of them, by mere chance, starts with an A too. If someone works really hard or under very tough circumstances, you could use the verb ackern.

How to start learning German as a Beginner
Scroll to top